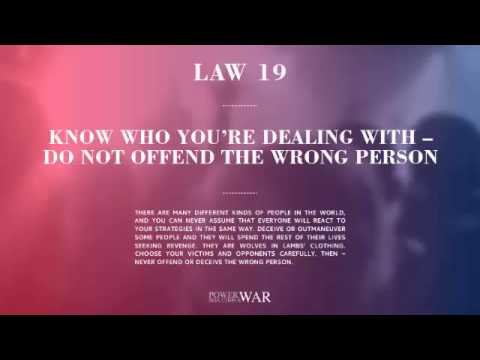 Law 19: Know who you’re dealing with – do not offend the wrong person

Transgression: My bro is a head football coach. For his first game at his new school I was having a talk with an old guy up in the booth because my bro had to let their film guy go because he didn’t know what he was doing, so I agreed to film for him. I’m also an area coach, it’s not my career but I love the game and the lessons it can teach.

The old guy started lamenting how excited he was for my brother to turn the program around and build some tradition there. Wanting to soften expectations I said something to the effect of “.500 is the best we can hope for this year, nobody has gotten it done in the past and building this will be a multi year process.”

The old guy was the AD and had previously been the head football coach in the 90s. He didn’t show it but definitely took personal offense to the comment.

The next year my brother had to let a middle school coach to because he was in incompetent and it was May so I agreed to leave my school to help him shepherd a good ms class up to varsity.

From day 1 that AD was doing everything he could to sabotage my student athletes season. Not having our field lined properly, starting an investigation about coaching conduct in regards to player treatment, indulging every bullcut haired mom’s concerns and dragging me into meetings. Making us play 7 minute quarters instead of 8 for travel, shutting the stadium lights off the second the game was completed, not finding a replacement game when an opponent cancelled. Making me sit out a week after a parent battered me after a game because he heard from the other parents that their kids were called into the earlier mentioned investigation, so “if there was a problem the kids would feel safe to come forward” and all this other bullshit.

I hurt his ego on accident and he took every opportunity he could to sabotage these kids’ season, on purpose.

You want to see what a man’s made of? Give him a little bit of power and see how he uses it.

It didn’t matter that these kids won every game except for the 1 week I was barred from practice, or that they learned to love the game, or that we ended the season with 5 more kids than we started with, with a record number of kids going out. It didn’t matter that my boys won the first football league title at any level since joining that league 20 years ago, or that I worked my ass off picking kids up and dropping them off if they didn’t have a ride, or that I was a strong masculine role model for some of those kids that hadn’t experienced that in maybe their whole lives, it didn’t matter that I paid out of my own pocket to equip some of these kids or to feed them when the AD budget somehow didn’t leave Disbursement funds for just the 8th grade team.

It only mattered that I offended his ego. You want to see what a man’s made of? Give him a little bit of power and see how he uses it.

Support The Author! Buy The Book!